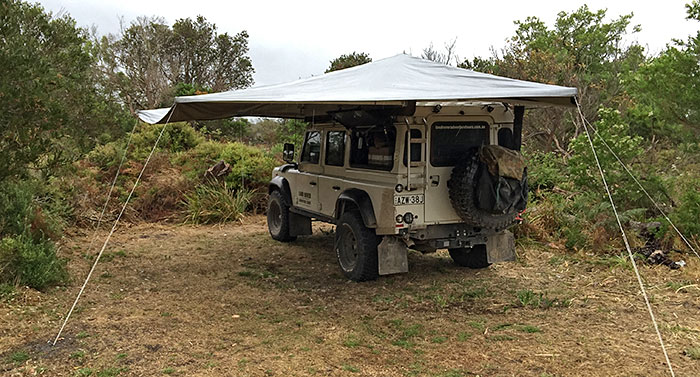 Bundutec BunduAwn: After having used the normal roll out type side awnings for many years we were keen to try a product that provided a greater area of shelter for all inclement conditions. After allot of research we opted for the Bundutec BunduAwn as it provided cover around three quarters of the vehicle and without poles, was able to give us a greater usable space under the shelter. Some people might ask why you need the extra cover at the front of the vehicle? It's a good point and one that I originally asked too. I can tell you after traveling into some of the country's hotter and more arid areas, it makes a big difference having the extra shelter over the front of the vehicle. Not only does it keep things more comfortable around the vehicle but it also protects important navigation equipment, cameras, IPADS etc from being cooked inside.

The Bundutec BunduAwn is a pole less, Foxwing type awning that covers three sides of the vehicle when opened. It comes in both 2.4 and 2.8 meters in width and can be mounted to most full size roof racks. It is sold by BunduTec Australia http://www.bundutec.com.au/index.php and recommended retail prices are $1199 and $1299 respectively. 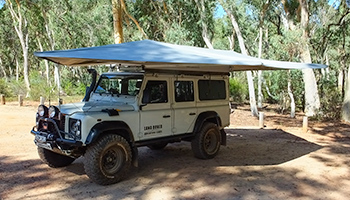 Something that will immediately strike you when you first see the Bunduawn is the height of the packed unit.

This is a big awning!

It's backing fame is much taller than other awnings on the market and this again aids with keeping ambient temperatures down when under the shelter as well as giving more headroom for the taller individuals. We were initially concerned that the physical size of the packed unit would leave it vulnerable to damage from trees/ scrub etc but so far we have not managed to do any significant damage to the exterior cover even though some seriously overgrown tracks have been traveled with the BunduTec Awning. We were also concerned that given the size, it would be difficult for one person to manage the setup and packing away of the awning . This, I'm please to say, has not been the case. It is in fact a simple process for one person to open and pack away the awning.

A couple of things to be aware of - When opening the awning you will need to be mindful of the two pop up spars at either end of the awning. These are mounted through the frame with a small washer securing the spar. This small washer does seem to be prone to coming off and needs to be monitored. You will also need to be aware of the position of the external cover when opening the awning. The corners at either end can get caught by the wings as they open and this can damage the zip or cover itself.

All in all we are of the opinion that the Bunduawn has been a good addition to our tourer's and after having used the awning in some seriously bad weather, including three days of solid rain in the Northern Tablelands, two weeks of wind and rain on Tasmania's South/West coast, and some heavy downpours in Birdsville we can say that the awnings perform extremely well and do everything that we have expected of them.

Future improvements - On our agenda for the near future is to fit a set of detachable poles for added support in really windy conditions. What we've found is that we can strap the awning down with the ropes but the downward force the wind puts on the awning is quite strong. We feel the addition of supporting poles at the end of each rib of the Bundutec BunduAwn (for very windy conditions) will make the unit much more resistant to damage in these severe conditions. We also intend to make a set of walls to attach to part of the awning to providing further shelter in really poor conditions.

Conclusion: The BunduAwn is a great awning and has prooven very useful on our adventures.